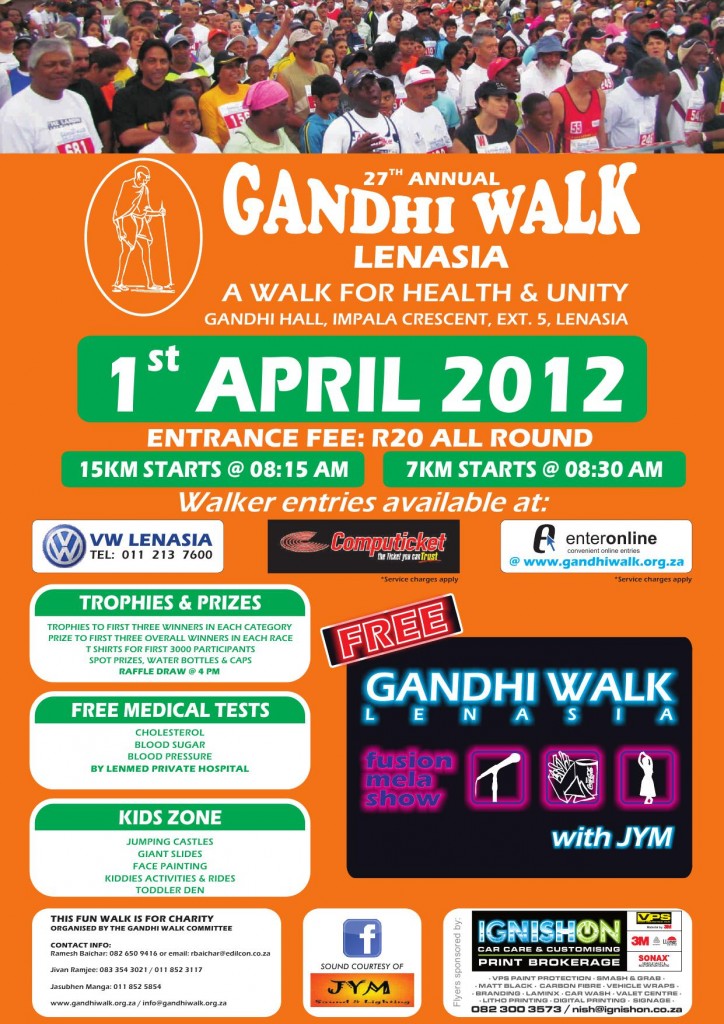 Lenasia, a township just outside the city of Johannesburg in South Africa, is an area that had been demarcated as an Indian area by the previous white government of the apartheid era. People of Indian origin were forcefully moved to live in this area. Just the basic necessities had been provided, hence the community were forced to raise funds and provide for their needs.

In the 1980’s the Transvaal Hindu Seva Samaj began building a community hall, known as the Mahatma Gandhi Hall, to cater for the needs of the Indian community. This hall was designed to cater for weddings, religious functions, talks and shows of a religious and cultural nature, meetings and functions pertaining to the community. The hall is made available to all groups on request. The complex was planned lo cater for a vernacular school and a Mandir. These objectives have yet to be met due to lack of funds The hall itself drained all the funds, and the community was forced to borrow money. This money had to be paid back, and it was decided that one of the ways to raise funds was to start a walk, This was the brainchild of teacher Chagan Chiba and Mohan Hira.

The first Walk took place in 1986. People taking part in the Walk had to buy a Walkers number and there was also the sale of food, and people present were motivated to donate towards settlement of the Samaj’s debt The Walk really took off from the third Walk onwards. A younger, more dynamic committee, which called itself ‘The Gandhi Walk Committee’, and renamed the Walk to “The Gandhi Walk” took over the organizing of the event. The Committee vigorously and actively went out to promote the Walk, and the number of participants increased from just over 1,000 to 3,500, then 4,000.

The Walk has thus become a very popular event. The debt of the Samaj has been liquidated, and the Committee is busy maintaining the hall and providing other facilities and needs The Committee has recently bought indoor and outdoor games and sporting equipment, and has inaugurated a Youth Wing The idea is to provide safe and supervised recreational facilities, and also to train the youth to take over the work of the Gandhi Walk Committee.

The walk, since the debts of the Samaj have been liquidated, has been generous enough to assist other needy causes, without discrimination.” The Committee has donated openly and without any racial, colour, or religious considerations. It has donated to black and white welfare organisations. Over the years some 35 organisations have received contributions from the walk. The Gandhi Walk has thus become widely known for the service it has provided. It is an event that is looked forward to.

The Walk drew participants from all over Gauteng and surrounding areas. It s an ideal occasion for long lost friends and families to meet. The walk also promoted the ideals of the great Mahatma. It created the atmosphere where people walked together in friendship and harmony, even total strangers, and participants – black, white walked together in peace and harmony and representing a total Rainbow nation.

Another reason for the success of the Walk is the dignitaries the Committee invites to the Walk. The late Oliver Tambo, late Chris Hani, late Joe Slovo,Walter Sisulu, Ahmed Kathrada, Isu Chiba, Moulvi Yusuf Cachalia, Abdul Minty of the Norwegian Anti-Aparthei d Movernent, Harsh Bashin – Consul General of India, Mrs Priti Sen Gupta, traveller and writer and the first Indian woman to go to the North Pole. the Mahatma’s grand daughter, Mrs. Ela Gandhi, Mr. S R. Tayal – Consul General of India, Bruce Fordyce, Mr. Jasmat Nana. Primrose R. Sharrna, Consul General of India and our Local Counselors Ismail Vadi, Rehana Adam and Prema Naidoo. From India, Maheshbhai Kothari and Nareshbhai Desai son of Mahadevbhai Desai life long secretary to Manatma Gandhi and many others have at one time or another, been guests of the Gandhi Walk Committee. Mr. Amos Masondo the Mayor of Johannesburg was represented by his secretary at the 16th Annual Walk and Mr. S.S Mukerjee, the High Commissioner of India, together with Mr Sam Ramsamy of NOCSA was present at the 17th Annual Walk, resulting in the Walk also providing a platform for people to rneet many high profile dignitaries.
The Committee is constantly needing funds and sponsors to make the Gandhi Walk grow for years to come.