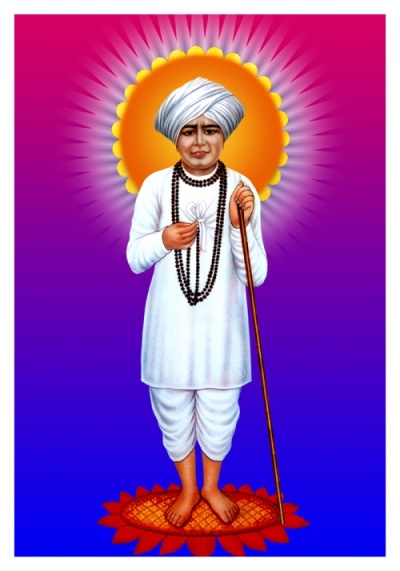 Jalaram Bapa was born in Virpur, Rajkot district, Gujarat, India in 1799, on the seventh day of the Kartika month. His father was Pradhan Thakkar and his mother was Rajbai Thakkar who belonged to Lohana clan. He was a devotee of the Hindu god Rama.

Jalaram Bapa was however not willing to live an householder’s life and continued to take care of his fathers business. He was mostly engaged in serving pilgrims, sadhus and saints. He separated himself from his father’s business and his uncle Valjibhai asked Jalaram Bapa and his wife Virbai to stay in his house.

At the age of sixteen, in 1816, Jalaram married Virbai, the daughter of Pragjibhai Thakkar (Somaiya) of Atkot.[1][6] However, he was inclined to completely withdraw from materialistic life and become an ascetic, Virbai proved to be an asset to him in his works of feeding poor and needy.

At the age of 18, soon after returning from pilgrimage to Hindu holy places, Jalaram Bapa became the disciple of Bhoja Bhagat of Fatehpur, who accepted him as his disciple. Jalaram was given the “Guru Mantra” (mantra) and japa mala in the name of Rama by his Guru Bhojalram. With blessings of his guru, he started “Sadavrat”, a feeding center, a place where all sadhus and saints as well as the needy could have food any time.

One day, a sadhu who came to his house gave him a deity of Lord Rama, forecasting that Hanuman, the monkey-god and devotee of Rama, would follow soon. Jalaram Bapa installed Rama as his family deity and after a few days, a deity of Hanuman appeared out of earth, on its own. The deity of Rama’s consort Sita and his brother Lakshmana also appeared.[7][8] Due to a miracle the container in the house of Jalaram, where grains were stored, became inexhaustible.[2] Later other devotees and village folk joined him in his works of human welfare.

Soon his fame spread as an divine incarnation. Whoever came to Virpur, whether Hindu or Muslim irrespective of caste, creed and religion were fed by Jalaram. This tradition of feeding people continues to this day in Virpur.

Once a tailor named Haraji, who was suffering from severe stomach-ache came to him to get himself cured. Jalaram Bapa prayed to God and Haraji was cured. He fell at Jalaram Bapa ‘s feet and addressed him as Bapa. Since then he was known as Jalaram Bapa.[3] Soon his fame spread and people came to him to get rid of diseases and problems. Jalaram Bapa would pray for them in the name of Rama and miracles happened. Both Hindus and Muslims became his disciples. In 1822, Jamal, son of a rich Muslim merchant fell ill and doctors gave up all hope. At that point of time, Haraji, told Jamal of his experience (parcha). Jamal, prayed from his house, that if his son is cured of the disease, he would give 40 maunds of grain to Jalaram Bapa for sadavrat. His son recovered and Jamal visited house of Jalaram Bapa with cart load of grains and called him Jalla so Allah!!.

At one time, God in the guise of an old saint told Jalaram to send Virbai to serve him. Jalaram consulted her and with her consent sent her with the saint. But after walking some miles and reaching a nearby forest, the saint asked Virbai to wait for him. She waited but saint did not return. Instead, she heard an Akashwani stating that it was only to test the hospitality of the couple. Before the saint disappeared, he left a Danda [staff] and Jholi[Cloth bag], with Virbai. Virbai returned home to Jalaram, as instructed by the celestial voice with Danda & Jholi. This Danda and Jholi are still at Virpur and kept on display in a glass enclosure.

Jalaram Bapa and Virbai had a daughter named Jamnaben from their marriage. Jamnaben’s grandson Harirambahi was adopted by Shri Jalaram Bapa and his direct descendant, Giridhar Bapa and now his son Jaisukhram Bapa now head the gadi of revered Virpur shrine of Jalaram Bapa.

It is the birthplace of Shree Jalaram Bapa. The main shrine of Jalaram Bapa is located at Virpur. The shrine is actually the house complex where Jalaram lived during his lifetime. The shrine houses the belongings of Jalaram and the deities of Rama, Sita, Lakshamana and Hanuman worshipped by him. It also has on display the Jholi and Danda said to be given by God.[5] But the main attraction is the portrait of Jalaram Bapa. There is also an actual black and white photo of Jalaram Bapa, taken one year before his death.

The temple is one of a kind in the world in a way that it has not been accepting any offerings since 9 February 2000.

In modern time, devotees of Jalaram[12] have experienced that if they pray to the saint sincerely, he blesses them and fulfills their wishes. These experiences are known as Parchas. They pray to Jalaram Bapa and if their wish is fulfilled they do[13] fast and visit a temple on Thursday
Today there are large followers of Jalaram Bapa, who worship him like a God, similar in line of Sai Baba of Shirdi.

Jalaram Bapa’s birthday is celebrated on 7th day Shukla paksha of the Hindu month of Kartika as Jalaram Jayanti. It falls on seventh day from Diwali. On this day, devotees are served meal as prasad. There is a huge fair and festival at Virpur on the occasion and millions of devotees visit Virpur, on this day to pay their respect to the saint and have prasad of chiefly of khichdi with Bundi and popular farsan item Ganthiya[7][8][17] The Jalaram Jayanti celebrations are also held at all Jalaram temples spread throughout India & abroad with festivities, where devotees participate to pay their respects and have prasad.

The idol of Jalaram Bapa is shown as a smiling man holding danda and wearing often a white paghadi and white dhoti-kurta.[19] The deities of his patron deities Rama, Sita, Lakshmana and Hanuman are also mostly found along with his idol. Temples of Jalaram Bapa today can be found in almost all big and small towns across India. Outside India, temples are in East Africa, United Kingdom, Canada, USA and New Zealand.

some more history on Bapa

Shree Jalaram Bapa was born in the year 1799 (i.e. 4-11-1799) in the village Virpur, Gujarat. His mother, Rajbai was very fond of serving sadhus and saints. No sadhu and saint could go from Virpur without receiving the hospitality Rajbai. Shree Jalaram Bapa’s father’s name was Pradhan Thakkar, who was engaged in business. At the tender age of 16, Jalaram Bapa married Virbai, daughter of Thakkar Pragji Somajia. Jalaram Bapa was however not inclined to live household life and to continue to do business with his father. He is mostly engaged in serving sadhus and saints. He separated himself from his father’s bsiness and stayed with his uncle, Valjibhai, who was very fond of Jalaram.

It was obvious that Jalaram Bapa was inclined to completely withdraw from marital life. Fortunately his wife, Virbaima decided to follow the path of Jalaram. So, when Jalaram decided to go for a pilgrimage for holy places, Virbaima followed him. At the age of 18, Jalaram Bapa accepted Shree Bhojalram from Fatehpur as guru and was given a “Guru Malaa and Mantra” in the name of Shree Ram. With blessings of his guru, he started “Sadavrat” a feeding centre, a place where all sadhus and saints as well as the needy could have food any time during 24 hours. Nobody returned from that place without having food. All this he did single handed with Virbaima assisting him. Soon his fame spread as an incarnation of the divine. Whoever come to Virpur, whether Hindu or Muslim was fed by Bapa.

Once three Arabs in the service of Thakore of Rajkot demanded an increase in wages by four rupees in a month. Being refused, the Arabs resigned and set out to Junagadh. On their way, they hunted few birds and kept them in their shoulder bag. When they reached Virpur, Bapa asked them to have their meals and then go. When they protested that they were Muslims, Bapa said that in the court of God there was no distinction in caste and creed and they were welcome. The three Arabs had their meals in the temple but they were embarrassed that they were carrying dead birds in their bag. The Bapa touched the bag and said that the birds were feeling suffocated. The Arabs opened the bag and found that the birds were alive. They flew away to a nearby tree. The Arabs were amazed and understood that they were in the presence of divine person. They fell at his feet and asked whether they would get a job in Junagadh. Bapa said “What was the need to have a job in Junagadh? The Arabs serve only one master.” Just at that time, a camel man sent by Thakore of Rajkot arrived there. He took back the Arabs with him saying that Thakore has sanctioned an increment of seven rupees in their wages.

There are many stories about the greatness of the saint of Virpur. Remembering the stories, we can fill the heart with devotion and gratitude. Jalaram Bapa worked very hard for whose who were struck by the terrible famine. In 1881 (i.e. 23-2-1881) Jalaram Bapa left his body in his prayers. This is the story of the great saint of Virpur. 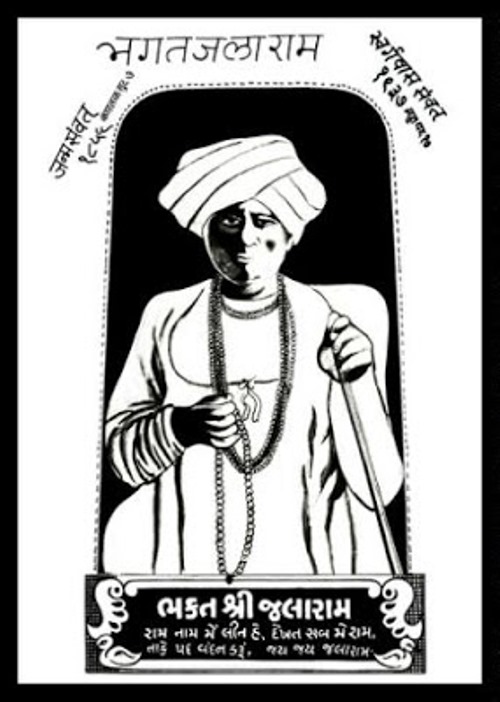