Keertan Dheda is Professor and Head of the Division of Pulmonology, Department of Medicine at the University of Cape Town.
He has made seminal contributions to understanding the pathogenesis, diagnosis, management and control of drug-resistant TB in South Africa.

His contribution to this area has been internationally and nationally recognised through the 2010 International Union Against Tuberculosis and Lung Disease Scientific Award, and the South African MRC Gold Award in 2013.

He recently led a team that published their findings in the Lancet, showing that placing new rapid TB diagnostic technology (Gene Xpert) in a clinic was feasible when testing is performed by a nurse. This approach has led to rapid diagnosis of drug-resistant TB, with more patients being placed on treatment.

Professor Keertan Dheda has won another award for his outstanding research. He has been chosen for the award of one of this year’s NSTF-BHP Billiton Awards for innovative research carried out at South African universities. I have informed his parents of this award and they are delighted that Keertan’s work on developing a cure for tuberculosis is being recognized by the scientific community in South Africa. 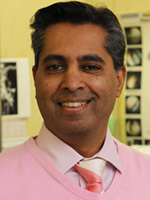 To an individual for an outstanding contribution to science, engineering and technology (SET) through research and its outputs over the last 5 to 10 years

Tuberculosis (TB) is the most common cause of death in SA; however, antibiotic resistance to the disease has built up. Professor Keertan Dheda, Professor of respiratory medicine, director of the Lung Infection and Immunity Unit and head of pulmonology at UCT, has been conducting extensive research on drug-resistant TB in SA. Dheda and his collaborators have significantly improved our understanding about diagnosis, treatment, transmission and control of TB. His contributions have been nationally and internationally recognised.